Since the Gigatron itself apparently works, but I didn't have a suitable game controller to operate the system, I naturally wanted to connect a keyboard.

There is also the so-called Pluggy McPlugFace board. An adapter from the serial (DB9) to PS/2 port. Driven by a small Attiny85.

The Attiny85 could also be programmed with my TL866II and the firmware on GitHub in the Utils directory (under Babelfish). Attention: the fuses must be set correctly according to the information (file BabelFish.ATtiny85_fuses.txt in the directory). Set directly in the programmer.

Unfortunately, I didn't have a suitable female SUB-D socket at hand, only one male. I wanted to adjust that mechanically in a very pragmatic way with a self-built gender changer.

Unfortunately fell into the trap because I didn't consider something: the female and male sockets are mirrored. Actually clear, since they should connect the right pins when plugged into one another.

By the way, a gender changer does that too - see the two following pictures: on one side pins 1-5 are on top, on the back they are below.

My self-made gender changer, two DB9 female for crimping, with ribbon cables in between, not only did not mirror the pins, but also caused another problem: due to poor crimping, there were shorts between some neighboring pins (i.e. between the two rows of the DB9). As a result, there was no picture on the monitor of the Gigatron (what exactly happened there and why, I have not examined more closely now). Due to the mirror-inverted socket, there was no power supply for the Attiny85 and also none for the keyboard. Fortunately, the 5V were on unused pins and therefore not connected to the Attiny85, so the chip survived the Attiny85.

The originally intended female socket belongs on the back of the board (solder side). The male socket I have must therefore then be on the front (component side). As a result, the PIN sequence has been mirrored twice and it fits again. However, it is quite tight on the front. So that the collar of the socket does not short the pins of the Attiny85, these were masked with insulating tape.

After plugging in the gender changer and connecting it to the Gigatron (initially without Attiny85), I first measured the voltage at the base of the Attiny85 to be on the safe side - everything was correct where it should be (pins 4 and 8). 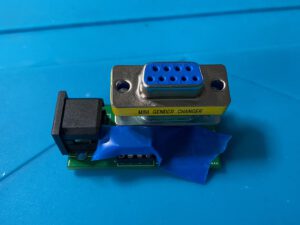 Then everything connected and Gigatron started. Keyboard works, menu can be operated and software selected and started. 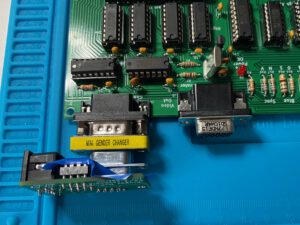 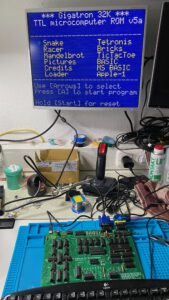 As soon as the game controller (and the right SUB-D socket) arrives, I'll take a closer look at the system, test the software, connect it to the PC via an Arduino, and whatever else you can do. A stylish case couldn't hurt either ...

But first I will dedicate myself to one of the next projects. Let's see what it will be: Get the Tube64, Zeta V2, or the SBC-85 ready ...